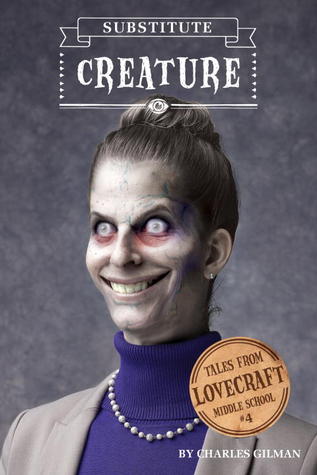 The fourth installment of the Lovecraft Middle School series continues the story of Robert, Glenn, Karina, and Robert’s pet rats, Pip & Squeak as they battle against the evil Professor Tillinghast that has been slowly taking over the school.

After a huge snow storm traps Robert and his friends inside Lovecraft Middle School with the creepy new substitute, Ms. Carcasse, Pip & Squeak inform Robert that they need to show him something. He has had a sense that something was off with the substitute the entire time, but was unable to figure out exactly what it was until he saw that it was snowing inside the chemistry lab.

I have absolutely loved the Lovecraft Middle School series by Charles Gilman. One of my first experiences with middle grade horror and I’m definitely satisfied. The fourth book did a great job of continuing on with the story, however, the only aspect of the book I didn’t enjoy that much was the lack of focus on the substitute as a minion of the main protagonist. She was almost just an extra character that didn’t get fully developed. Nonetheless, I enjoyed this book very much.